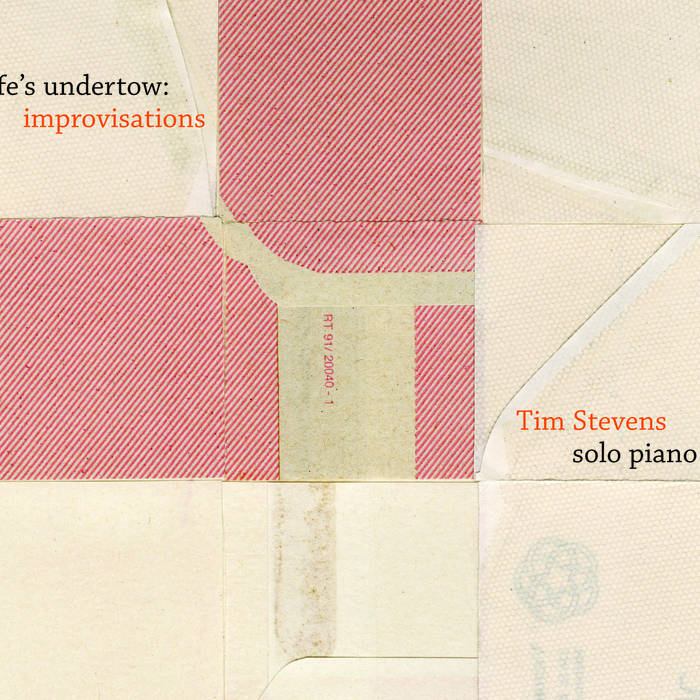 Ten years after the first, the second solo piano album from Tim Stevens. Undertaken as a consequence of his winning a Professional Development Award from the Australasian Performing Right Association in 2011. Entirely improvised music.

'The last mentioned, a gifted improviser and an especially thoughtful musician, has a new solo CD that has been demanding a lot of my spare time during the past few weeks and affording me much pleasure. It strikes me as one of the most original and radical recordings of improvised jazz I have heard. So if I tell you that it sounds neither especially improvised nor very much like jazz, that is not intended as a criticism, more an indication of just how original and radical it is.

'Life’s Undertow: Improvisations (Rufus Records RF108) doesn’t sound improvised because there is a harmonic cogency that, in the faster and more dissonant pieces, seems quite remarkable. It is one thing to improvise a slow, tonal piece and have it all hang together, and obviously it is a comparatively straightforward matter to improvise on the template of a blues or a standard (I don’t say it is easy to do well or with originality). For that matter, it is perfectly possible to blast your way through a fierce, fast, free-jazz explosion of sound and get by with a heady mix of gesture and energy – the notes don’t have to add up. But Stevens’s music on this disc is different.

'With barely a blue note in ear shot and scarcely a phrase that might count as swing, the music makes regular recourse to a harmonic language that seems to belong to composers such as Bartók and Hindemith, the latter’s Ludus Tonalis coming to mind each time I listen. The textures are spare, almost always in two parts, and in a piece such as “The Line’s Tension” there are passages of genuine, functional counterpoint. Writing good counterpoint – where two (or more) lines of music intelligently coexist – is tricky enough, but making it up as you go along is impressive.

'The disc begins with “Sublunary,” a disarmingly pretty waltz that might feel at home in a 1960s French movie. Elegant, yet stark, a simple tune is picked out above an equally simple line of rocking accompaniment. Eventually the right hand plays chords. But that’s all, that’s the piece. In “So Even Though,” Stevens builds big, dense chords, ratchets up the harmonic tension impressively, before allowing it to dissipate in a hymn-like sequence of gentle modal block chords above which Messiaen-like clusters of notes flicker and glitter. “Campervan of Dreams” is held in place by a repeated G sharp enfolded in a continuously shifting series of luminous harmonies.

'You see, it’s always twos; even when the music doesn’t consist of two lines of music, there is that binary sense: the modal blocks and the glitter; the fixed note and the shifting harmonies. “Subsistent Things” is really a single melody, always evolving (I think of the artist Paul Klee “taking a line for a walk”) and passing in and out of chords that colour it or change its direction – again there’s that duality, the melodic line and the chords.

'At the end of “Subsistent Things,” the music dissolves into a rapt sequence of sparkling harmonies that are simultaneously reassuring in their luminosity and yet slightly unnerving because they never quite settle. It would have been an enigmatic end to an album that has always had you guessing, but “Subsistent Things” is only the penultimate track. There remains “Synapse,” a hymn tune – or possibly a folk song – that brings the CD to a proper close. It is, I think my favourite single piece of the ten in this collection and it rounds things off simply and very neatly.

'Is it too neat? Probably. Should it have been left off in the spirit of “killing your darlings”? I dare say. Would I, in Tim Stevens’s shoes, have been able to resist its inclusion? Certainly not. Am I glad it is there? You bet.

'(For the record, I should mention that Stevens thanks me on the cover in a list of “supportive mates,” though we have met, I think, just the once in a radio studio. Still, given the quality of this music, I am extremely proud to be associated with it.)' - Andrew Ford, 'Inside Story'

This record is for Sally L James
and so am I