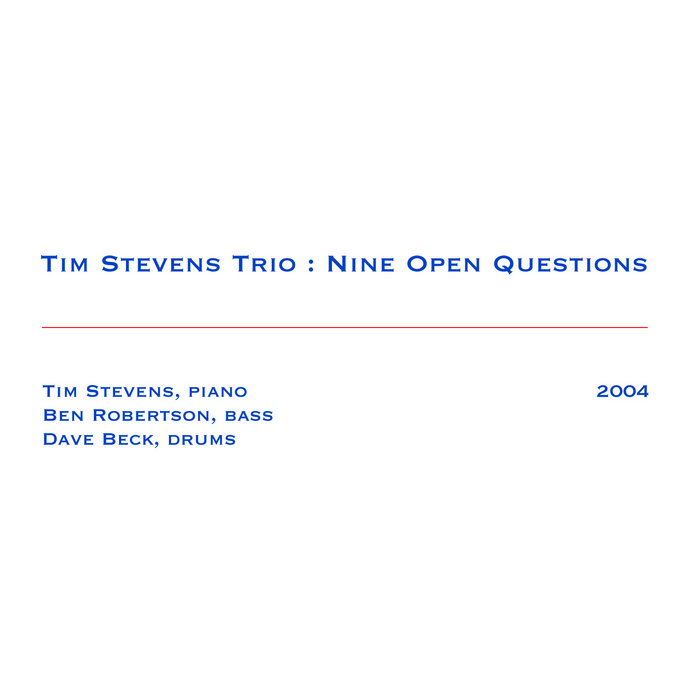 Because the recordings on this album are owned by the ABC, I am not permitted to offer it digitally without promising to give Aunty an unconscionable amount of the money that the downloads would earn. I'm not going to do that because it's manifestly unfair and totally unreasonable and I just plain old don't want to. I'm sorry if this inconveniences anyone but until the ABC changes its mind on the digital thing I shan't be changing mine.

I can however offer copies of the CD, which are in stock.

It's the first album my current trio with Ben Robertson and Dave Beck made, something like fifteen years ago, and it comprises original tunes, a couple of which date from the late 1990s, others from when I lived in Sydney (2000-1) and the rest from after I came back home. The trio used to meet on Monday evenings and have dinner then rehearse in a small room in the flat Sall and Oliver and I occupied in West Hawthorn. The dinners and the rehearsals went together and the band formed in a spirit of friendship as well as musical sympathy.

'Must be' takes its name from the last string quartet of Ludwig van Beethoven. There's a big E-flat thing going on. Ben had to take the first improvisation because I could never put the repeated E-flat convincingly to the side on short notice.

'Three's a quorum' was submitted to the Bernie McGann trio and because this was a group without guitar or piano (I shan't say 'chordless' because even two notes together constitute a chord) the challenge was to make musical sense with just a pair of lines. An interesting compositional challenge, resulting in a piece I was pleased with. Bernie's trio never played it but that's of no importance; we do.

'Stops on the road to smooth' has five in the piano's right hand and two in the bass. so it's 5/4 or 5/8, but not really the latter, because the melody and the left hand accompaniment are phrased mostly according to the crotchet. The title is a funny story that can't really be told here. It involves the progress of a certain individual to his breathtaking level of suavity, and a particularly sobering and staggeringly not-cool moment along the way.

'Esj'', which I used to play with Browne - Haywood - Stevens (Al could never quite pronounce the title, and tended to tie himself in knots trying to do so. If you imagine the initials SJ and then take out the 'a' sound at the end, that's what you've got. DJ in 'Roseanne' was frequently called Deej. It's more or less the same thing) was written as a kind of portrait of my then girlfriend, now wife. The ballad of the set. This recording was done in a single take, introduction and everything. Mal Stanley was engineering and he even complimented us on it when we finished. His quietude in the studio is something to behold so that he felt compelled to say anything was really wonderful.

'Commuted' is the kind of piece that I can never quite tell how it happened. It's one we never preformed all that much, but the take on the album is one I'm really pleased with. At the end, listen (if it interests you) to the way the final chord is belted out and left for a bit, then gives way to the sympathetic harmonics from silently depressed C-sharp keys down the Spencer Street end of the piano.

'The little man in his nightshirt' was, obviously enough, Oliver. The nightshirt was red. I can see him now, running awkwardly and smiling madly. I mess up one of the bars in the head out but Ben and Dave are right there, and you may never have known.

'The unmistaken' is another portrait of Sally, and a completely different mood from 'Esj''. I remember when I wrote it playing it through and thinking it captured exactly something of the way I perceive her. We have a silly joke when we see someone wearing a G-string that shouldn't be seen (isn't that the whole point?) but can; the words 'if I'm not mistaken' are uttered somewhere amongst whatever it is we are talking about and so the other knows to look around and spot the hideous.

'Recessional' is another tune that comes from the Browne - Haywood - Stevens days, and it's one that people always loved to hear us play. I wrote it because the band was coming to an end as I prepared to move to Sydney. Not exactly 'Lest we forget' but a touch of that I suppose. Because people loved it like they did it stayed in the book and even now we're inclined to play it at the end of the gig.

'Encore: chaser' is a joke piece based on another that I shan't name. Fun to play. There is a story but to tell it would give away the material. You can probably hear it if you try hard enough.

All compositions by Tim Stevens

For Jim McLeod
In admiration and with affection