Get fresh music recommendations delivered to your inbox every Friday.
We've updated our Terms of Use. You can review the changes here.

There'll be some changes played 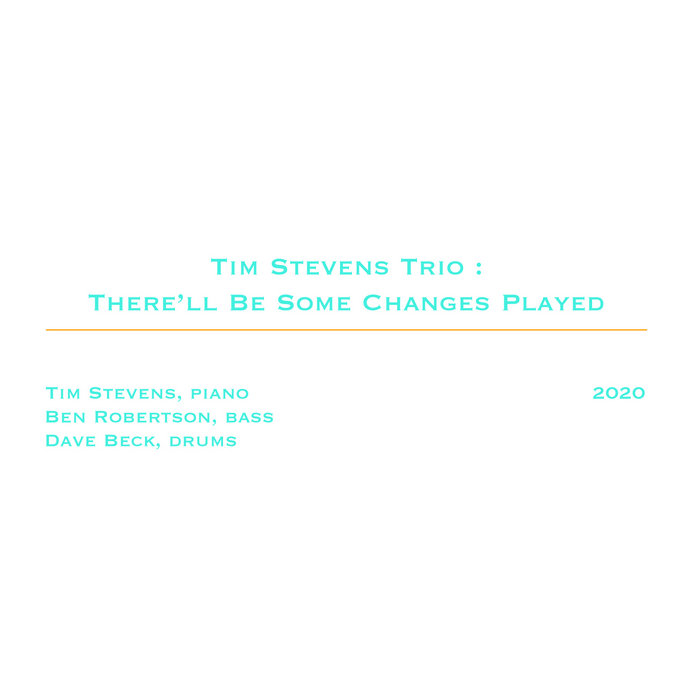 It’s been a little while since we did a trio record, and between my solo excursions and the rather unusual and demanding effort with the double trio, I’ve found my attention to be directed elsewhere. It’s great to be back. It’s easy to forget important things, and I’m at fault frequently for doing just that. But Ben and Dave and I rehearsed at Ben’s place on November 19 last year and I was staggered in remindedness (good tune title, that one) as I felt the dedication they have to this band, and to my tunes, and even to me. They are such superb bandmates, and it delights me to be bringing you another volume of our work together.

This recording, like my solo album 'Media vita', draws its material from the 366 tunes I wrote during the leap year of 2016. It brings the total of those made public on recordings to 22, so there are a few to go, I guess. But they’re pieces I’m pleased with and that we premiered at Melbourne Recital Centre back when it had any interest at all in me or my music, in 2017.

The effort of writing a piece every day sounds like something staggering, but it was really only a matter of finding an hour or two to determine where my mind was and whether or not I could make something convincing out of the idea that presented itself. This collection opens with the tune composed on January 1, and concludes with its counterpart from December 31. I’ve written elsewhere about the circumstances of the January 1 piece, so you can look for that if it interests you. December 31 I was at a kitchen table in Queenscliff, sans piano, just me and the pencil and the paper. The year had passed, and the work was done.

I want firstly to thank Ben and Dave, whose company is richly rewarding and whose musicianship is incomparable. Then I want to thank Chris Lawson, who led a really enjoyable session and is now something like the band’s fourth member. Thanks to Tim Dunn for continuing interest and support, and to Cheryl Orsini for handling the design. Thanks to David Moyle, Andrew Ford, Martin Jackson, Jessica Nicholas, Mal Stanley and anyone else who has played or promoted anything I’ve done. Ever. Loving thanks to Meg and Names, and to Soph. Thanks also to Pat Jaffe, Colleen Clayton, Julie Lokan, Jenni Mills, Al Lemoh, Tony Gould and Tab Halley. And to my beautiful family my deepest thanks and most fanatical love. Sall, Oli, Freddy, Lulu, you are without question the absolute best.

For Meg Morley and Naomi Wileman
and for dear Soph as well
Blessings, kisses, my sincere affection