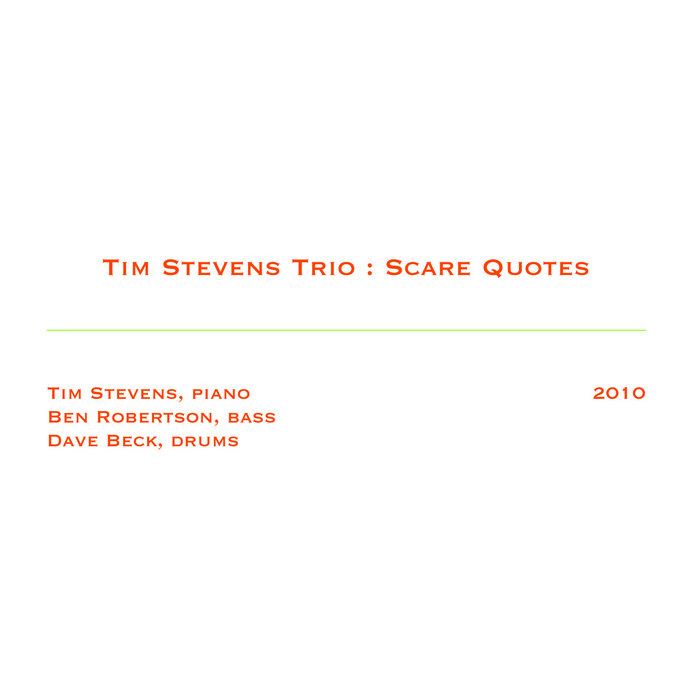 Half and half, free pieces and written tunes, the fourth album from Tim Stevens Trio.

'Scare quotes' 'comprises six of Stevens's original compositions premiered at the 2010 Wangaratta Jazz Festival, plus five collective improvisations, including some with esoteric titles. The idea here is to include both pre-structured and spontaneous forms on one recording, where previously each has been performed on separate albums. Stevens's originals are captivating - intelligently melodic, and cohesively understood by Ben Robertson's bass and Dave Beck's neatly omamented drumming. 'Bluesosphere Blogs', a topical title, has a lively discursive sensibility employing a fast-running theme that scurries to a climactic interchange of striking piano chords and busy drums. The five spontaneous pieces are, of course, more abstract and most are totally out of tempo: 'Wiseband and Huff' wanders introvertedly , allowing each member variously to take centre stage, where the piano flows and shimmers. Another unstructured, tempo-less piece, 'Initiatrix', conveys a sombre mood with its bass-end piano notes while 'Letters[,] Diaries' features interplay between high treble piano tremolos and Robeftson's slightly underrecorded bass.This is an interesting concept, interspersing written forms and autogenetic works from three skilled, long-term musical associates.' - John McBeath, 'The Weekend Australian'

All compositions by Tim Stevens

For Anja Grant and Anastasia Russell-Head