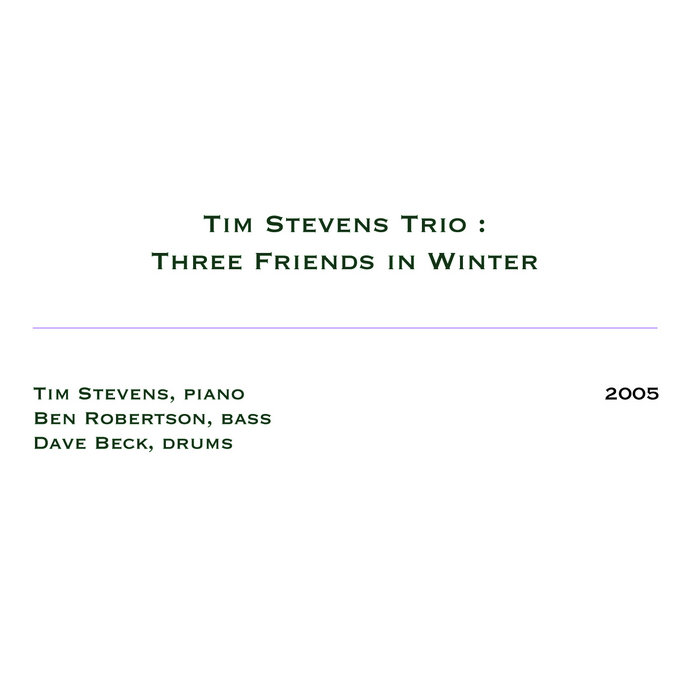 The second album from Tim Stevens Trio, expanding upon the collaborative approach developed within its first, in the exploration of spontaneous improvisation. All pieces except the last one are completely improvised.

'[T]his is essentially an essay in space and tone. It is very compositional, with each instrument working against the others thoughtfully.
'The music unfolds with engrossing logic, exploiting the drama of the pause and sudden lyrical flow. It allows the players – particularly drummer Dave Beck – to expose new expressive potentials.
'[The suite] 'Three Friends Of Winter', is thoroughly unified and beautiful. For all the decades of practising technique and learning traditional rules, Chinese paintings are often executed with great spontaneity. The Tim Stevens Trio has found a musical equivalent.' - John Clare, 'Sydney Morning Herald'

'Bravery is required to enter a recording studio without any compositions; to just freely improvise. There are no guarantees of the outcome, after all, and studios are not cheap places to doodle in.
'For this, their second album, pianist Tim Stevens, bassist Ben Robertson and drummer Dave Beck took that plunge. It was July in Melbourne, so an icy plunge it was, and that wintery theme is pursued through the titles and can be detected in the playing, including the delicate, icicle-like piano of the opening track 'July'. The success of the venture as a whole, however, has less to do with the season than with Stevens' intelligent intuition for form. He has a particular ability to take whatever has just happened and render it musically logical by his rejoinder... [T]his is generally a beautiful album, as well as being a brave one.' - John Shand, 'Limelight'

All compositions Beck/Robertson/Stevens except 'Three friends in winter' (Stevens)